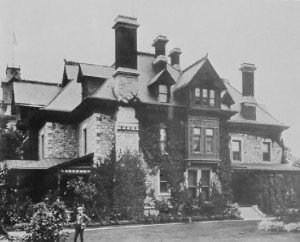 In 1881 James Oliver purchased the Chess and Vincent properties on West Washington Street. He ripped out the woodwork inside the building and completely remodeled the structure, adding an eighteen carat gold water fountain to the entry hall. James and his wife resided here until their deaths. The house stood vacant at that point, until 1911 when the city of South Bend purchased the property, demolished the structure and erected the South Bend Central High in its place. 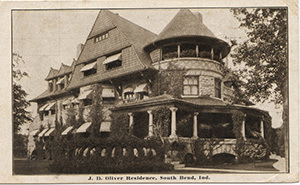 The grandest and most fully intact Oliver family residence is Copshaholm, a mansion which has been converted into a house museum and open to the public through The History Museum. This residence, located in the historic West Washington district, was designed by Charles Alonzo Rich, of the architectural firm Lamb & Rich. Copshaholm was built between 1895 and 1897 and is a blend of Queen Anne and Romanesque architectural styles, which included a carriage house in the same style. It was built from native Indiana granite fieldstone, which James Oliver hand selected. The home, which is about 12,000 square feet, is full of leaded and stained glass features and light fixtures created by Tiffany & Co. Copshaholm is the ancient name of Newcastleton, Scotland, where James Oliver was born. 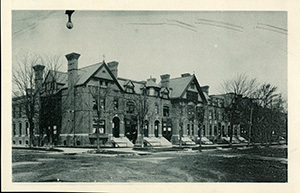 The Oliver’s also built the Oliver Row Homes, which J.D. Oliver and his wife, Anna Gertrude, were the first residents of row home #1, in 1883. There were nine residences in total, spanning 200 feet on Main Street, and each home had four stories, including both a basement and attic. When these homes were built they were considered to be the most fashionable residences in the city and had the modern convenience of gas and water. 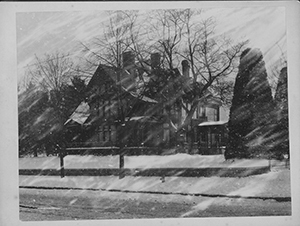 The Oliver’s also built the Cunningham House, which is now the Oliver Inn, located at 630 West Washington Street. James Oliver purchased the property in 1885 for $25,000 and built the 25 room Queen Anne house as a wedding present for his daughter, Josephine Oliver Ford. The house has a corner turret and two curved-glass bay windows in the front. The house has seven fireplaces and original Waterford crystal sconces. After the death of Josephine and her husband, the house was occupied by Gertrude Oliver Cunningham and her husband, Charles Frederick Cunningham for over 50 years. Upon their death, they donated their home to the Northern Indiana Historical Society, now The History Museum, which sold the house and furnishings to create an endowment for Copshaholm in 1987.