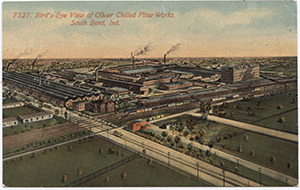 The Oliver Factory on the St. Joseph River was the first factory of the Oliver Chilled Plow Works, which was then called Oliver & Little, Co. James Oliver and Harvey Little purchased one half of the share of a foundry owned by Ira Fox and Emsley Lamb in 1855, and with their success were eventually able to purchase Lamb’s remaining half interest, renaming the business the South Bend Iron Company. From this humble beginning, Oliver expanded the business in 1876 when he purchased the Perkins Farm on the southwest edge of South Bend for $30,000. This complex had five buildings with a total area of 200,000 square feet and was powered by a new, 600 horsepower Harris Steam Engine which employed 400 men who could cast 50 tons of metal into 300 plows daily. 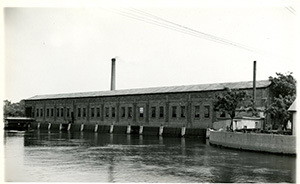