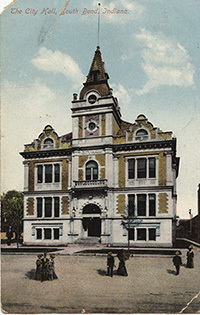 South Bend was a good place for the Olivers, and in return, the Olivers sought to improve the city in which they lived. In the summer of 1900 it was apparent that the city of South Bend desperately needed a new city hall building. However, they did not have the funds in hand to pay for this building. James Oliver offered to build and subsequently lease a new city hall building to South Bend. The City Council accepted James’ proposal, on the condition that the building would not cost more than $75,000 to build and would be leased to the city for five years at $7,500 annually. The City would also be able to purchase the building at any point within that timeframe for a sum equal to the rental cost plus an additional four percent interest. This building was able to house all of the City officers and boards, as well as the police department. For the residents of South Bend, they had a functional building that was also elegant. City Hall remained at this location until its demolition in 1970, when the city offices were moved to the present County-City Building on the corner of Jefferson and Lafayette Boulevards. 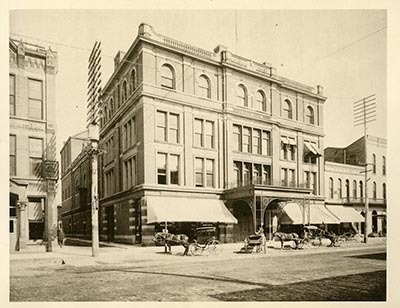 James and J.D., both theater fans, decided to build an opera house in South Bend so they could enjoy the theater without having to travel. In 1885 they opened the doors to the Oliver Opera House, which was located Main Street. The building cost $200,000 to build and was known as one of the finest opera houses in the United States. The vestibule was marble and mahogany and the frescoes, curtains and scenery were all painted by the same Chicago-based scenic artists who did the Chicago Opera House. In 1931 it was converted to a movie theater, when the popularity of live stage performances in the area had passed. The doors to the movie theater closed in 1953, the auditorium and stage were demolished in 1955, and then what remained was demolished in 1978. 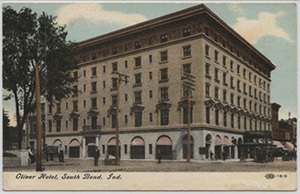 In addition to the Opera House, the Olivers also dreamt of building a hotel that would impress the visitors of South Bend. In 1899 the Oliver’s dream became a reality when the architectural firm of Rutan, Shepley and Coolidge began construction on the hotel. The six story hotel cost a total of $600,000 to build and was constructed with a steel skeleton, hollow tile arches, and partitions, which made it fireproof. The first two floors were public, with lobby and rotunda designed in an Italian Renaissance style embellished in gold with allegorical figures painted to represent the four seasons, the fine arts, the elements, and the performing arts. The Oliver Hotel was known a the most beautifully decorated building west of New York. It was demolished in 1967 and replaced by the 25-story Valley American Bank Building, now called the Chase Tower.