In 1852, at the corner of Michigan and Jefferson Streets, Henry and Clement Studebaker started their first blacksmith shop. They initially produced wagons and the Studebaker Wagon Works grew to be one of the largest wagon manufacturers in the world, the only company in this industry to successfully transition to gasoline powered vehicles. 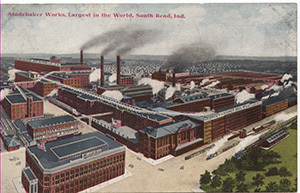 By the 1870s, the company had grown so large that it was time to form a corporation. The Studebaker Brothers Manufacturing Company was organized. In 1874, the Studebakers built a large, four-story factory that was eventually destroyed by fire. It was immediately rebuilt on a larger scale and continued to grow. In 1897 they started experimenting with automobiles and by 1904 they were selling gasoline powered cars. 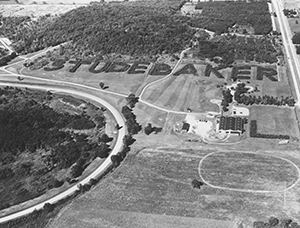 In 1926, the Studebaker’s established an 800-acre Proving Grounds site to test their automobiles. In 1938 they planted 8,259 white pine trees to form the largest living sign, with each letter over 200 feet wide, 200 feet long, and 60 feet tall, according to the Guinness Book of World Records. This land is now the Bendix Woods County Park.